A Place to Connect Teachers and Support Children

During project work, we find it very important to give the children anything real that the children can touch, feel, hold, sketch, and investigating.  Although the children can not obviously touch a real fetus the models were the closest models we could explore.  In order to find these models, I was able to contact an organization that was willingly to let us borrow the materials.  It is important when asking for items to borrow in your classroom to share with the organization the importance of project work, what it actually is, and how the children intend on using it.  I typically like to share photos, anecdotes, and representation with these organizations to show  them how we used the materials.  You do need to be an advocate for your children because often times the organization does not know how confident and capable we believe children ages two, three,

four, and five can be!  Please share this knowledge with them so that they know how capable they are!

The Leapfrogs were provided with models of four wombs and three fetal models to fit in the wombs with babies the size of babies that are ten, twelve, and fourteen weeks along.  Maddie (3.7), Drake (3.10), and Alli (2.11) feel the models of the fetuses. Maddie shares while holding the fourteen week old fetus, “If this baby comes out it will go to the NICU (Neo-Natal Intensive Care Unit).  If that baby comes out (the full term baby) then it will be okay.”

The fetuses and the uteruses were set on the table for investigation. Aidan (5.2) puts the fetuses in order according to size without any prompts. He points to each fetus and identifies them as big, medium and small.   Alex (5.4) organizes the wombs from the fetuses according to size.  He then shares the sizes of each by starting at the top, “Hugest, biggest, small, and very small.

Alex (5.4) looks at each of the four uteruses and three fetuses.  He wonders why the arms, ears, legs, and body are more defined in the last fetus compared to the first one.  Mahi offers him a book to look for the answer.  Alex looks at each page and shares with Mahi.  “These pictures are showing the babies ear and eyes.  It looks like it starts small and then big.  Is that what that says?”

Through what we have learned from books, articles, project work, and Lilian Katz, we know that sketching is so important.  As Lilian shared during her training at the Engaging Young Minds Conference, adults take notes when they are learning something new and do not want to forget it.  Children sketch.  They sketch while listening to an expert, they sketch for predictions, they sketch to document data, and they sketch to teach us what they have learned.  Below are sketching during the last two months.  Their work is phenomenal! 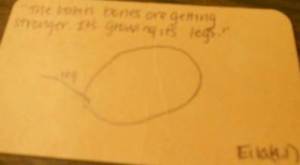 Eila (4.1) uses the computer as a resources with a power point depicting each month of pregnancy and what is happening to the baby.  After reading and looking at each picture, Eila creates three sketches based on the first month, third month, and ninth month slides.  She describes the first picture as the “embryo”, the second as “the babies bones are getting stronger.  It’s growing legs!” and the third, “Nine months baby is ready to come out.  The baby is kicking because it does not have much room.

Hayden (2.11) watches Lydia trace the uterus and then tell Mahi her words.  Hayden gathers paper, pencil, and a clipboard and tells Lydia and Mahi, “I want to do it!”  He traces the uterus several times.  “That mommy’s belly.”

Lydia (3.10) traces each of the four uterus in the tenth, twelfth, fourteenth, and sixteenth week of pregnancy.  She sketches each side of the uterus, draws several pictures, and asks Mahi to document her pictures.  She documents several babies in different stages of pregnancy.  She also documents the umbilical cord.

Brayden (4.4) sketches several circles.  The first two circles represent the tummy, the second the uterus,  and the last image inside is a two-week old fetus.

Eamon (4.10) sketches a six-week old fetus inside a uterus.  “The baby isn’t full term so it doesn’t have all  its body parts.”

In early July, we had a visit from our expert, Polly Guy.  Polly’s daughter, Ava, graduated our program in May.  Polly’s pregnancy was what began our interest in babies and so the children were thrilled to have a visit from our old friend Ava as well as her new addition to her family. Lily was about six weeks old at the time of her visit.  The children were excited to see Lily and began by only watching her as she moved. The children watched as Lily moved, cooed, and cried!  They then started to ask questions.

The Leapfrogs had several questions that they wanted answered.  We also observed and even had a chance to touch her.  Some children held her hand, others touched her skin, and others felt her little toes.  The children were excited when even Kara and Mahi got to hold Lily.  The children started to squeeze in to get a closer look at Lily in our hands.  Some questions were:

everything worked.  Polly graciously moved her car so that we could see the infant seat, the mirror she used to watch Lily, and the base.  She then pulled out the stroller and taught us how it folded and unfolded.  She then taught us by showing us how to attach the car seat to the stroller.After Polly’s visit, the children discussed everything at lunch.  Addi (3.4) tells Mahi, “My baby Anni has a stroller.  On her stroller is a canopy!  Just like our baby seat! The bouncer too!” Keegan (4.2) shares, “all infant seats need a base.  The man in the video said you can turn the baby seat at one year old.  We should write that down somewhere.”

Learning about the Car Seat

Aidan (5.0) sketches a drawing of the car seat.  He labels to Mahi who writes the strap, the place for that babies feet, the handle, and the hood of the infant car seat.  He then uses the word wall to write the word baby.  He identifies each letter as he writes it.  He then asks Mahi to add car seat to the word wall.

Lydia (3.9) copies the word Adjuster Strap to label the infant car seat.  Madison (3.6) uses scribbles and shapes to document the word strap.  The girls help Mahi identify each part of the car seat as they look at a diagram.  Drake (3.8) tells Mahi one morning, “This is called a car seat,” he says bring the car seat over. He then puts the car seat in the base.  “The base goes in the car. If you want to carry it to the car you have to put the canopy up so sun does not get in the baby’s eyes.  Then you need to hold the handle.”

Makayla (5.9) creates a car seat out of clay.  She has placed the car seat behind her as a guide for her creation.

Nolan (4.9) measures and counts the inches on the ruler. Elisabeth (4.10)  tells Nolan, “Don’t forget that you need to start at zero to measure.” Alex (5.2) measures the width of the car seat. The children then asked Mahi to write down the measurements on chart paper.  Elisabeth (4.10) takes over the documenting as Alex (5.2) shows Elisabeth the number thirty-six.

These activities and thought processes were made possible through our project work.  We have writing materials, clay, measurement tools, and the real items from our project available to the children for this investigation to take place.  The teachers and staff ask open ended questions and we encourage the children to find the answer instead of giving them the information.

We have created a word wall for our third project in a row and the children have really begun to use it to their advantage.  The words are meaningful and the children use these words to label their work.  We learned from Pam Scranton in one training that she had always told her class to write their words on their work before they were done.  This could be based on the child’s ability and could be as long as a sentence to as short as letter like symbols or scribbles which can be translated and documented on to their work.

6.16.11 Elisabeth (4.10) asks Mahi to add the words that the children have learned about the car seat to the baby word wall.  Elisabeth uses a large piece of chart paper and copies all of the words she has learned so far. Eila (4.0) joins her and writes the last two words.

Project Work has three phases.  The first phase has several different attributes to it.  This is the stage where you determine officially what your project is and begin to collect data about the connection the children have with the topic, the questions they have, the information they know, and the direction you will be going.  Check out our phase one work below.

Makayla (5.9) draws two pictures.  The first is a picture of a mother and child.  She drew and labeled each picture and created a pacifier.  “Babies need pacifiers if they are sad.”  Her second drawing is a baby learning to walk to his/her mom.

What we know about Babies:

What we want to know:

Check out our newly added parent’s tab with books about feelings to share with your classroom or child! Find the tab on our home page or click on parents tab in this post.

From responses from both teachers and parents, I decided to continue both project work and any other work we are doing in the classroom or as a professional team with my assistant.  Over the course of the next few weeks I will updated the blog to meet where we are currently with our project.  By this point, I should be ready and prepared to share what I have learned so far with my current, Conscious Discpline goal. Enjoy!

The children have been very interested in the Honeybee classroom (our Birth to Two Classroom), siblings and cousins that were infants, hoping their teachers would have babies, and a parent who was pregnant.  The conversations about babies became the strongest when one morning, the children were able to feel the babies in arm in the mother’s stomach.  They watched the baby kick and were so excited to share with other classrooms, teaching staff, and their parents.  When Ava’s sister was born, Lily Kay, she brought in pictures to share thus beginning our project!