A Place to Connect Teachers and Support Children

The children created their newest production on Friday. This time, we had both a pre-show and a show.  The children began by having a dance routine that then followed the production of the Three Little Pigs.  The children began preparation for the pre-show by looking up dance moves and videos with dancing on YouTube.  (Have you had a chance to see my blog about technology in the room! Click here to find out more!) The Kidz Bop dance video to a popular song pr was just what we needed for a pre-show.  The children practiced watching the video several times and mimicking the moves.  As interest continued, more and more children wanted to join.  We decided collectively that we needed more room and turned our back half of the classroom into the theatre.  We brought in a projector that we hooked up to a lap top and began to watch and learn the moves.

As the dancers learned the moves, others began to prepare for the show.  Seating was set out in different locations to test the best place to sit for the show.  The children requested to watch a video of a play where the actors and actress reenacted the Three Little Pigs.  The children began to call out things we needed in order for the show to go on.  “Pink noses! Pigs! A Wolf! Houses!” were words shouted to the friends in block center who were preparing the items.  When the video was finished, the children broke into groups of three to five children.  Each group of children were in charge of a house.  Each of the three houses were made from blocks but the children represented each differently pretending there was the stick, straw, and brick houses on the stage of the theatre.  A child reminded his group that in the Three Little Pigs story the wolf came in through the chimney.  They then set off to build a chimney.  When his group was done building, he checked on all of the groups.  “Are we ready?  Okay, friends.  This is what we need to do.”  He then tells each group of friends how the play needs to look.  He retells the entire story and tells the characters where they should be going during main parts of the story.

Look below to view their play in pictures! 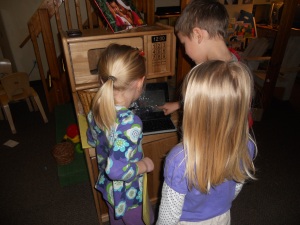 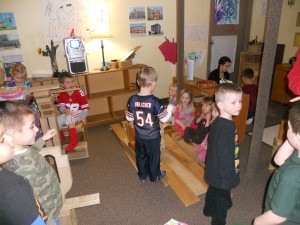 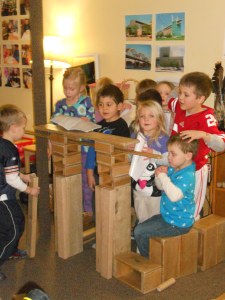